This is a perfect betting game for any foursome, especially if your handicaps vary significantly.

Form two – two person teams on the first tee by any method you like.  For the first 6 holes each team competes for the low net score on a hole.   If there is a tie for low net, then the second ball comes into play and the hole is won or lost counting both balls of each team.  The winning twosome gets one point each for that hole. If there is a tie using all four players scores, no points are awarded.

After completing 6 holes of competition, new partners are formed for the next 6 holes.  After 12 holes, the final partner switch is completed.

For betting purposes, each six-hole team is playing for a pre-established amount.  The net number of wins and losses for each player is calculated at the end of the 18-hole round and payment is made accordingly.  This is similar to a Nassau bet.

The great part of this game is the partner competition is evened out because each player has every other as a teammate for a portion of the competition. 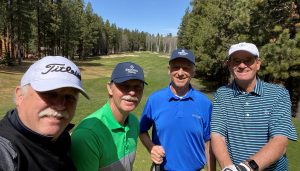 Submit your golf game below and be eligible for a prize drawing.

The Plus | Minus Game