Banker is a unique kind of side bet game because it is played one hole at a time and may start or be discontinued on any hole.  Like most betting games it is best played using net handicap scores.

Before the round starts the group decides the minimum and maximum bet and if Presses are allowed.  (Be careful with presses!)

The betting starts at the conclusion of the first hole.  The person with the lowest net score on hole #1 becomes the Banker on hole #2.  (If more than one person has the lowest score the tie breaker is the longest putt.)

The remaining players then declare a 1-on-1 bet against the Banker for that hole.  Bets must be within the agreed min-max dollar range.  Once everyone holes out, scores are compared, and winning bets recorded.  A tie or a push is common, but players could also agree on the long putt tie breaker.

This is a fun betting game, but it requires a bit of accounting.

Let’s look at an example of play.

Fred and Al hit average drives and decide not to Press.  Warren hits a huge drive and presses Bob which makes their bet $40.  Bob then hits in the rough and decides no more pressing from him.  Now the hole is finished.

Keeping track of the bets owed is the only tough part of this game.  It is easiest if a separate score card is used, and the player determined as the banker records the amounts won or lost on their hole. 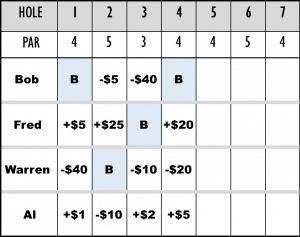 Or keep it really simple and just pay up after each hole is played.

Send us your comments…

Submit your golf game below and be eligible for a prize drawing.

The Plus | Minus Game