When we made the turn we found ourselves in the presence of the owner, Mr. Art Dunkley, the
American founder and owner.  He was greeting all the players and making sure our expectations were being met. 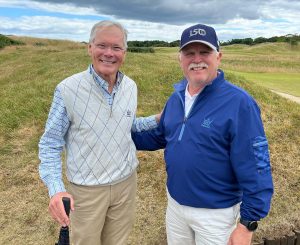 Kingsbarns is famous for service, and I would heartily agree.  It doesn’t get any better than the way we were treated.  Art asked us if we were aware that playing two groups ahead was Fred Ridley, Chairman of Augusta National!  I assumed Fred was in town for The Open.

When we finished the round I headed for the clubhouse to find a table for lunch.  And there was Mr. Ridley walking right towards me.  In an impulsive moment I said; “Hello Mr. Ridley, would you mind a quick photo?”  He responded graciously with “Of course!”  Then he surprised me by continuing the conversation.  He asked where I was from I told him “just near Portland, Oregon”.  He responded by telling me that Waverly Country Club was the location of his first time playing in the amateur championship.  I told him I was a senior in high school right near by.  He said we must be about the same age and asked my birthday.

I was overwhelmed by the generosity from him taking time to visit with me.  He is a 100% class act and a great ambassador for golf.   A moment I will never forget.

The Irony of Golf

Life as a high handicapper